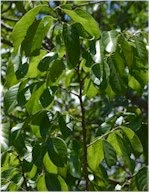 Katazamiti is a native to sub-Saharan Africa. It is a semi-deciduous to deciduous tree up to 20m tall with a dense rounded crown and tall, bare stem. All parts of the plant are used in traditional medicine .Formerly called Bridelia  micrantha , It is traditionally  used in the treatment of stomach ailments  and diseases such as  gastritis , salmonellosis , gastro-enteritis, diarrhea and constipation , tapeworms and as emetic for poisons  ( causes vomiting ).

It is used as atreatment  for the skin problems  such as  ulcers , boils , and rashes ;for respiratory problems such as  perisistent cough, TB, Pnuermonia , Brochintis  and Pluerisy; as analgesic (pain reliever ) ;
It is also  sometimes used as  an ant malarial.
For toothache and gum diseases
For painful menstruation and to prevent abortion; as a stimulant and Restorative tonic (alterative) for fortifying pregnant woman.
It is used for treating sickle cell anemia, HIV/AIDS and Anemia in general.

Preliminary research on medical properties of Katazamiti has shown this herb to be beneficial in treating HIV/AIDS as it cures diarrhea and stomach discomfort, which are common illness in AIDS and contributes to the well being of the patient.
It has also been shown to be apossible principle inhibitor to HIV-1 reverse transcriptase .Katazamiti is also used in treating psychological problems such as neurosis and psychosis

By Anna  Athieno
She is an Entrepreneur, a blogger and is very passionate about nature
www.miraclehealingherbs1.com
Takecharge of your life , health is wealth .